24 September, 2009 – The following is an account of recent activities on the Brunswick Sapelo dolphin study by Penn Clarke:

A dream of a lifetime has come true. I got to capture, radio tag and release wild bottle nosed dolphins. Through The Dolphin Project I got to meet and work with Brian Balmer, who is getting his PhD studying dolphins in the Brunswick and Sapelo Island areas of Georgia.

In one of my early experiences volunteering with Brian Balmer, Kate Sparks, Suzanne Lane and I saw the birth of a wild calf with the mother pushing it on her rostrum to breathe with its dorsal fin still down. This experience on the Folly River west of Sapelo Island on March 31, 2009, made me vow to help these dolphins anyway I can.

NOAA has found that the Brunswick Dolphins have high levels of PCBs like the Orcas (killer whales) in the northwest Cook’s Strait, Canada. Dolphins around Sapelo Island have as many PCBs as the ones in Indian River, Florida. Because of this and other reasons NOAA decided that a health assessment was needed. 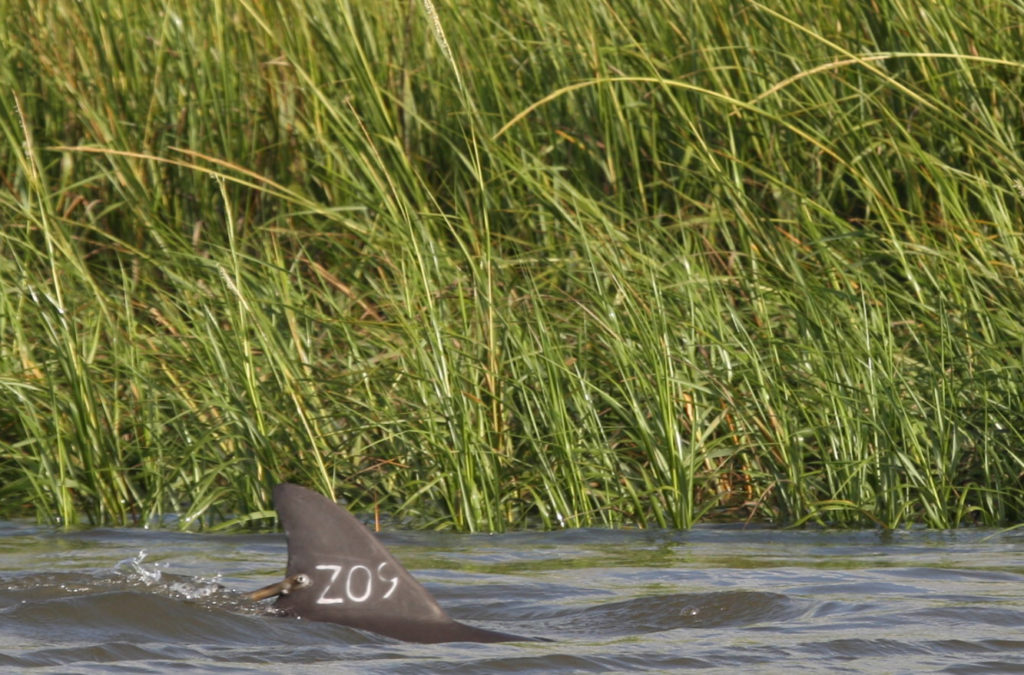 When one of the boats finds a dolphin to capture Eric Zolman’s boat comes to assess the situation before giving the okay to Larry Fulford on his catch boat. Larry then quickly circles the dolphin with his 400 foot long net with floats on the surface and a lead line 18 feet below.

The four chase boats are 21 foot inflatables with a hard bottom and twin 90 hp engines and go to the four points of the compass on the net. When the dolphin hits the net trying to get out it becomes entangled. The closest boat comes alongside to hold and calm the dolphin making sure it can breathe. If the water is shallow enough some get in the water or it is all done from the boat.

A large floating Navy mat is towed over and the dolphin with as many as eight people on the mat is towed over to Megamouth, a specially built boat that looks like a landing craft where the front lowers into the water. Non-pregnant dolphins are put in a stretcher and hand lifted into the craft to be weighed. All dolphins’ breathing is observed, and a monitoring system is attached with suction cups to measure heart rate. This is to be sure they are not getting stressed out during the procedures which last from 45‐ 90 minutes.

Of the 14 dolphins captured and released my week, I helped hold two through all the procedures. After weighing, the dolphin is lowered onto a mat on the boat. The lead of the five vets, Forrest Townsend put a tube through the mouth to the dolphin’s stomach to get a sample of the food it ate and removed one tooth to see how old it is. I helped another vet get samples of its urine & fecal matter before he took a sample of blubber.

All procedures are performed with sterile gloves; sterilizing and deadening the area before a procedure is performed. If the dolphin is female they ultra sound (3 on board at $30,000 each) to see if she is pregnant. If she is pregnant procedures are limited to blood work and a few samples, all of which are taken without bringing her aboard.

Randy Wells, head of the Sarasota Bay dolphin study that is ongoing for 39 years, is freeze‐drying numbers and letters on the captured dolphin’s dorsal fin and attaching a radio transmitter. Two sound people are recording all the sounds the animal makes. Samples are taken from its blowhole before it is lowered by stretcher into the water and then hand carried free of the stretcher where it is carefully monitored as it is released.

You really appreciate what these scientists go through to get this information. Up early in the morning, leave in the vans at the hotel in Brunswick at 6:15 AM to drive 45 minutes to Darien, load the gear from the trailer and house onto the boats and on the water by 7:30 AM. One chase boat leaves early by 4:30 PM to get the blood and other samples back to the house and onto FedEx by 6 PM each night. The blood work is done by one lab but there are 24 other labs that will be involved in analyzing the samples.

Holding dolphins in mud with oyster shells, Rod Hobbs, NOAA for Beluga whales in Seattle and Alaska, received multiple cuts up to his thigh. Brian Balmer’s foot was cut right through his booty. I gave him my hard sole booties and wear his cut ones for the rest of the week. Brian Balmer has a badly bruised thumb from a large male dolphin he was trying to calm in the net, and Darren Wray, our captain, deeply cut his index finger trying to cut the net away from our propellers. I was fortunate with only a few small scrapes and bruises and a very tired body for the week. These were
all the major injures for the whole 2 weeks.

It was hot with 90+ degrees but you could be in the water for 3 to 4 hours of the day. Part of our job was to pull in the net or watch and be ready for other dolphins that might get entangled in the net until it was pulled in. Being in the marshes you always kept an eye out for alligators or poisonous snakes. Our chase boat did not have a ladder and you could not use the engines to climb back into the boat. It was comical to watch the different ways people got back in with me being the worst.

28 dolphins were caught and radio tagged during the two week project and the scientists and vets have gone. It’s week three, and I’ve returned to the Brunswick area to assist Brian Balmer. For four days Brian and I cast off at 7 AM in a center console boat with 150 hp engine to listen for dolphins. We both wear earphones each listening for our assigned half of the 28 dolphins. We can hear the sound of the radio transmitter only when the dolphins surface to breathe.

A sound leads to a visual search and Brian Balmer takes photographs of that dolphin and any others around it. They have set up 12 radio receiving areas in the marshes. When a dolphin swims by a receiver it sends a text message to Brian’s cell phone that the dolphin just swam by. Three male dolphins also have a satellite tag which sends their position to a satellite which Brian Balmer can look at on his computer.

Penn Clarke, has been a member of The Dolphin Project for 20 years. 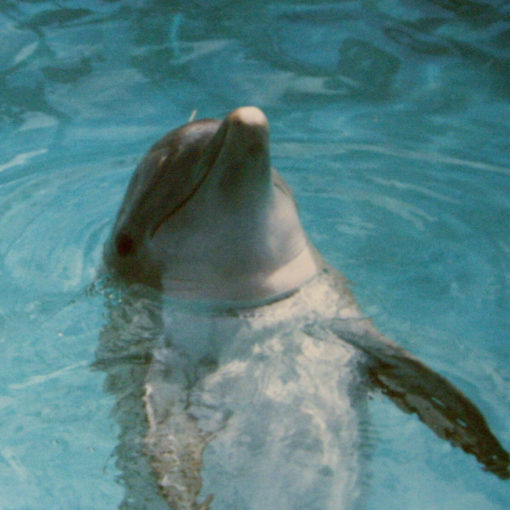 In 1987, Kitty and I had the privilege through Earthwatch of working with scientists and graduate students at the University of Hawaii […] 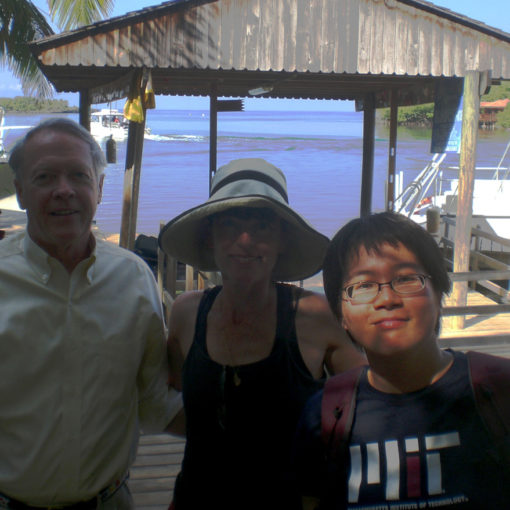 Dolphins seem to love life wherever they are. If I were a dolphin and had to live in captivity, I’d live at […]